Atomic Flower: the determination of entrepreneurs 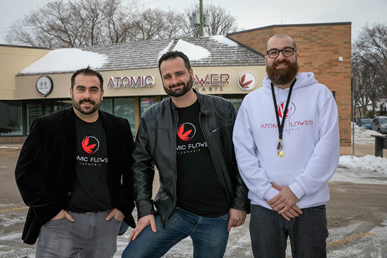 It is a long-matured project that finally came to fruition in January 2021. Joel Lafond and his two partners, Gabriel Fortin-Barbier and Peter Slupski, opened their cannabis store: Atomic Flower.

The three men have been working on this project for almost three years. As Joel Lafond explains, “It was in 2017 that we started to think about it. It was just before the legalization of cannabis. We suspected that legalization was going to happen and we wanted to be part of it.”

The road to opening their business has been long and winding. “With the legalization of cannabis, it was a whole new market. Everything is very controlled. “At the start of legalization, the first phase opened to those who wanted to become retailers. We applied, but we weren’t chosen. At that time, only companies that were already selling medical cannabis were able to open other locations. “

Although disappointed, the three friends remained realistic. “We suspected it would go like this, so we didn’t give up.” The group tried its luck again in 2019, when the Manitoba government announced that it wanted to develop these businesses in rural areas.

Joel Lafond continues: “Once again, we put together a plan. This time, it was accepted! Then, we got into a lottery to get the necessary permission to open our business.” Unfortunately, the lottery was not successful.

It was therefore not until phase 3, in May 2020, that Joel Lafond, Gabriel Fortin-Barbier and Peter Slupski finally obtained the necessary authorizations to open their cannabis business. “We were so happy!” remembers Joel Lafond. “After all this waiting and all this determination, we would finally be able to open our store. “

But again, the trio had to face new challenges. Joel Lafond explains: “We had to meet certain requirements in order to obtain the license that would allow us to sesll cannabis. As the three of us are new to this entrepreneurial world, we naively believed that some things could be done quickly, but no. Not to mention delays caused by COVID.

“We had to take risks. Despite the legalization of cannabis, many are still reluctant to start their business in this industry. We also had initially found a location, but the owners did not want a cannabis store. So we had to do a lot of other research to find a new location. “Finally, the banking aspect also gave us some problems. It took us four months to successfully open a bank account in the name of the store!”

The Importance of Seeking Help

Throughout this obstacle course, the three partners were able to surround themselves to find help. “We did a lot of research on our own rather than consulting with a professional cannabis retailer to save money, but we also sought help from CDEM.

“Their services have helped us a lot. It was the CDEM in particular that put us in contact with the people who would be able to support us, such as a security company in Saint-Boniface. “

It has been a long road, but Atomic Flower finally opened its doors on January 10, 2021 (1). “We are planning an official opening on February 1, but we are already open to the public,” says Joel Lafond. Our goal now is to serve our customers as best as we can, to provide them with what they need. Explain our products, answer their questions, in both French and English. “