From kit to career 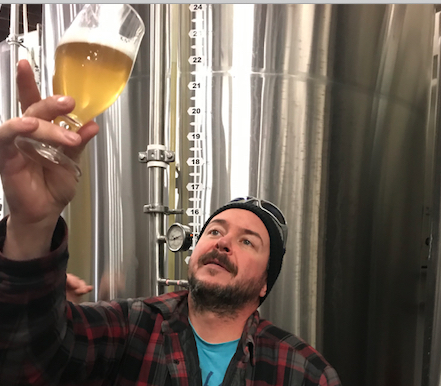 The Story of Marcel Dupas and his Caddy

Marcel Dupas took his time before embarking on an entrepreneurial career. At age 47, after years of working on his craft beer recipes, the brewer decided the time had come to market his own Caddy beer.

He named his inaugural brew after Caddy Lake, in Whiteshell Provincial Park. The moniker also evokes the refreshing water and joys of fishing so loved by the La Shoppe craft brewers. This pale ale is mildly hoppy to satisfy every palette.

In October 2019, Dupas began contract brewing his product at Torque Brewery. “It’s only been available for a month, but the response is incredible! People tell us almost every day how much they like Caddy. And there’s lots of positive feedback on our social media,” he says.

He got the idea to launch his own beer recipe back in 2015, when his wife gave him a beer making kit for Christmas. He used the malted barley, hops and yeast to make four bottles.

The Caddy is now available in the province’s MLCC liquor stores.

“When people tasted that beer, they said: ‘It’s good, but we want more!’” Encouraged by the first positive results, Marcel Dupas quickly purchased what he needed to continue to brew and perfect his beer at home. All that time spent in his garage refining his art prompted him to call his brewery “La Shoppe.”

“I want to keep the atmosphere of my garage, with friends dropping in, food and savouring the moment, but on a larger scale,” he says.

The entrepreneur now produces thousands of beers using a fermentation process that lasts around two weeks.

While he has always had an interest in beer making, the people around Dupas have also played a key role. “My friends encouraged me by liking my beer. I decided it would be a good idea to produce more so that more people could enjoy it.”

While he admits the learning curve was long, it was very rewarding. Today, the St. Boniface resident is proud of the result. His Caddy beer is beginning to make a name for itself on the market and is now available in the province’s MLCC liquor stores.

After four years, he now runs his own business. He uses social media platforms such as Facebook and Instagram to share his passion and promote his product.

Any plans in the works for Marcel Dupas?

“You bet. I’d like to open my own micro-brewery with a tap room in the near future.  And work with other people in the field. I have other kinds of beer to offer enthusiasts. But for now, my focus is on Caddy, the beer that comes in a sock!”